How to Pick a Winning Headline 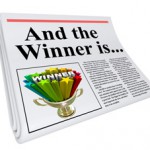 I’ve been doing a lot of copywriting workshops lately. In fact, I just got back from conducting a training program for a terrific group of marketers in Atlanta.

During the session, one of them asked, “When I brainstorm headline ideas for an ad or blog post, how do I pick the best one?”

In fact, that’s a challenge many professionals face – even those who are not copywriters or marketers. You make a list of headline possibilities and then get stuck trying to figure out which one will most likely be a winner.

I wish I had a fool-proof technique for this. I don’t.

However, I do teach a simple process for evaluating headline ideas that works fairly well. I call it The 5 C’s Method.

Say for example, you’re writing a web page to describe and promote a new service you’re offering. You know the headline is crucial, so you dream up a list of possibilities. Which one will likely work best? Using the 5 C’s method, you would ask these questions:

1. Does it COMMUNICATE a benefit?

The best headlines communicate a benefit of some kind. They imply, at the very least that you’re going to learn something, solve a problem, gain a new insight, save money, get a specific result, etc.

I often make the mistake of trying to be too clever with a headline. I once wrote the following headline for a magazine column: Fall In ‘Like’ With Prospecting. The editor disagreed with that approach and changed it to: 4 Steps To Prospecting Success. She was right.

The more clear your headline is, the better. The last thing you want is your target audience struggling to figure out what you’re trying to say. In most cases, they won’t bother.

3. Does it CREATE a sense of urgency?

This is optional. Your headline doesn’t have to convey urgency to work well. But if there is a genuine reason why the reader should act quickly, consider saying so in the headline. It’s no surprise that email subject lines that begin with “Last day…” get such high open rates.

It’s easy to get carried away and craft a headline that promises the world. I’m sure you’ve seen your share of over-the-top claims in headlines! But saying “Double Your Client Base In 5 Days – Guaranteed” just isn’t believable. (Sure, we want it to be true, but there is an influential part of our brain that’s saying, “This is B.S.!”)

The best headlines have a ring of truth to them.

Your headline doesn’t need to be clever or “wow”. But if it is interesting – and perhaps a bit different than what your target audience is used to seeing – then it stands a better chance of gaining their attention.

And when that happens, your web page, email, sales letter or other marketing piece is more likely to get noticed, get read, and get responded to.

So that’s my 5 C’s method for evaluating headlines. Like I said, it’s not foolproof. But it does increase the likelihood that you’ll pick a winner.

← How to Write a LinkedIn Introduction Request Do Special Reports Still Work? →

Ready to turn your sales team into top-performing sales writers! Get in touch today to discuss booking an initial 90-minute training session.